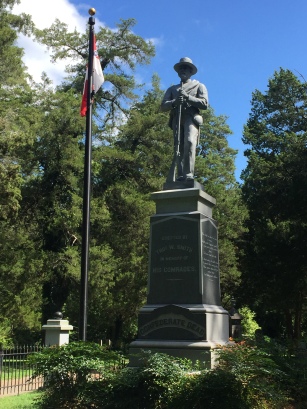 Governor Terry McAuliffe’s veto of HB 587, the clarifying language to Virginia’s war memorial protection law has no impact on existing state code. The Governor’s veto of HB587 only means the state code may at some point be tested in a court of law at great financial expense to localities and the taxpayers of those localities.

HB 587 was meant only to clarify existing state code to say in plain language that Virginia’s war memorial protections law encompasses all war memorials regardless of when they were built. The current law implies in language, logic and context that this is already the case. However, a Danville judge last year, in a case in which he ruled the law did not apply, observed the law might be misinterpreted and should be clarified by the General Assembly.

Veterans of Foreign Wars (VFW) Post 7819 in Crewe and veterans from other VFW, American Legion and American Veterans (AMVETS) posts requested language to clarify the law. HB 587 was requested by American military veterans. Delegate Charles Poindexter rose to the occasion to sponsor that legislation. The bill was actively and publicly supported by the Department of Virginia VFW, the Department of Virginia AMVETS, the 5th District American Legion, the Sons of Union Veterans of the Civil War, the Military Order of the Loyal Legion of the United States and the Virginia Department of Historic Resources.

Virginia’s existing law has protected our war memorials sparing communities needless discord and saving millions in litigation dollars. HB 587 was meant to ensure such would remain the case. The General Assembly clarified the existing state code’s intent. Regardless of the Governor’s veto, the General Assembly’s clarification is now a matter of public record.

In honoring our gallant war dead, veteran service organizations do not discriminate on one’s period or place of service or the often divisive politics surrounding the various wars. Politics has no place as men and women served and serve where they are called. This includes Confederate veterans who are, by law, custom and practice, American veterans. All American veterans are treated equally. What impacts one, impacts all.

Our honored dead cannot speak for themselves therefore we the living must speak on their behalf.  Virginia’s veterans have done so by asking for and supporting HB 587.

Veteran’s service organizations (VSO) have been involved in a number of costly and litigious war memorial preservation fights across the country in recent years.  Among these:

Elsewhere Vietnam memorials have been vandalized and one has been taken down while two war memorials in Hawaii (one each for World War I and World War II) are targeted for destruction so the space can be used for economic development.  These incidents, and many others across the country, illustrate an intolerant mindset that has threatened and continues to threaten American war memorials and the memory of the American veteran.

Every major veteran service organization has a memorial and remembrance component to their charters.  Preserving and protecting American war memorials is a ‘veteran’ issue.

[1] Eanes is the Action Officer for Veterans of Foreign Wars Post 7819 and a mayoral candidate in the Town of Crewe.