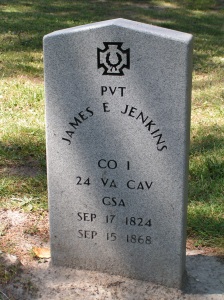 Today, Suffolk is the home to dozens of attorneys.  In 1850 though, Suffolk and its small population only had four.  The youngest of the four was James Edward Jenkins.

Jenkins was born in 1824 in Nansemond County, the son of John Cole Jenkins and Elizabeth Madden.  His Jenkins family proudly claimed descent from John Jenkins, a 17th Century Governor of present-day North Carolina; and on his maternal side, the Madden family of Ireland.

Jenkins excelled at an early age academically, and attended the College of William & Mary.  It was there in which Jenkins gained his legal background.  Jenkins graduated from William & Mary in 1846, and soon returned to Suffolk to practice law.  About 1848, Jenkins married Mary Virginia Briggs, the daughter of local merchants Merritt & Lucretia Briggs.  A year later, their first child was born, and was named George Briggs Jenkins.

The 1850 Census shows James Jenkins and wife Mary residing at a hotel owned by Richard H. Riddick, Sr.  While here, their second child was born, Mary L. in 1851, and another, Anne E. in 1853.  By 1854, James had saved enough money to purchase an office and home on a lot in town which had previously been the site of Morgan & Parker’s store.  Land records indicate that the lot was located on Main Street in “uptown,” in the general area which is now the location of the Suffolk Circuit Court.

The Jenkins family continued to grow throughout the 1850s and early 1860s.  In 1855, their second son James W. was born, followed by Robert C. in 1857, Henry in 1858, and Jonathan B. in 1860.  Around the latter part of the 1850s though, Jenkins began preparations to move his family.  In 1857, he sold his lot in town, and by June of 1860 Jenkins and his family appear on a census record in St. Louis, Missouri, with James practicing law.  His three oldest children George B., Mary L., and Ann E., remained in Nansemond County, and lived with their grandparents.

Unfortunately for Jenkins, the political climate in Missouri and across the United States soon dramatically changed.  While Missouri tended to be pro-Unionist like most of the Border States, Lincoln’s call for troops to suppress the “rebellion” in 1861 was met with lukewarm reaction.  Missouri Governor Claiborne F. Jackson refused to enlist troops to invade the Southern states and in May of 1861, Union troops began to flood into St. Louis to suppress the state’s lean toward secession.  In less than a month, Governor Jackson and members of the Missouri legislature were forced to abandon the capital at Jefferson City and go into exile following an attack by Union General Nathaniel Lyon.

For James E. Jenkins, while the evidence is not clear, it is believed that he left St. Louis soon after the Union occupation of the city.  Jenkins brought his family back home in time to see his native Suffolk fall to Union occupation in May of 1862.  With no place to go, Jenkins apparently took up residence in either Isle of Wight or Southampton County, and looked on as the area braced for what became the Siege of Suffolk.  Briefly, Jenkins’ life returned to some happiness following the birth of his seventh child, Charles W., in 1863.  However, when Confederate troops under James Longstreet withdrew from Suffolk in May of 1863, only a number of Confederate cavalry troops remained along the Blackwater River to protect the region.  It was then that James Jenkins realized he had seen enough from the sidelines, and enlisted on July 22, 1863, in Franklin in Company D of the 8th Confederate Cavalry Regiment.  Ironically, just weeks before, Jenkins’ cousin John Sheffield Jenkins had fallen leading the 14th Virginia Infantry in Pickett’s Charge in the Battle of Gettysburg.  This stunning personal loss to his family no doubt weighed heavily on the mind of Jenkins when he enlisted.

Jenkins’ service in the cavalry was spent uneventful along the Blackwater River until November of 1863 when his company was ordered to report to the command of Colonel James Dearing.  Dearing, one of many senior-classmen who had resigned from West Point in 1861 following Virginia’s secession, had led an artillery unit for much of the war.  In January of 1864, Dearing’s cavalry was transferred to the command of General Robert F. Hoke to help in containing Union troops who threatened eastern North Carolina.  Dearing’s raw recruits served ably along the Carolina coast, despite an unsuccessful attempt at taking New Berne in February.  However, their successful capture of Plymouth in April of 1864 brought the congratulations of the Confederate Congress, and a promotion for Dearing to Brigadier General.  Upon Dearing’s promotion, the 8th Regiment Confederate Cavalry was broken up and reorganized into Company I of the 24th Virginia Cavalry, and by May of 1864 transferred back to Virginia.

The abilities of James E. Jenkins, however, had apparently caught the eye of General Dearing.  In September of 1864, Jenkins was recorded on muster rolls as having been transferred from the 24th Virginia Cavalry and detailed as a Clerk to General Dearing.  His service with Dearing would make him an active participant in the Confederacy’s famed “Beefsteak Raid” and the Siege of Petersburg.  In fact, Dearing’s cavalry performed gallantly to the very end of the war, participating in the Battle of Five Forks, and at the Battle of High Bridge on April 6 following Lee’s retreat.  It was at this battle that Lee’s famed Army won its last victory, capturing nearly 800 prisoners.  Yet, it was a pyrrhic victory as General Dearing was mortally wounded, and Lee would surrender his army in just days at Appomattox.  Dearing was soon removed to a hospital in Lynchburg to be treated, and on April 23 was the last Confederate General to die of wounds received on the battlefield.  While it is unknown whether James Jenkins accompanied his commander to Lynchburg, it is highly likely, as Jenkins was not with Lee’s Army at the surrender, but rather officially paroled on April 25 in occupied Richmond, just two days after Dearing’s passing.

Jenkins returned to Suffolk following his parole and began to rebuild his life.  As most former Confederate veterans had lost their citizenship rights, it is doubtful that Jenkins ever appeared again before the courts.  In 1867, Jenkins’ last child Mathew was born.  Yet, James Jenkins would not live to see his son’s first birthday, as he died of tuberculosis on September 15, 1868.  Jenkins passed away at the age of 44, leaving a wife and eight living children.  The funeral was conducted at the Methodist Church in Suffolk, with Masonic funeral rites, and burial at Cedar Hill Cemetery.