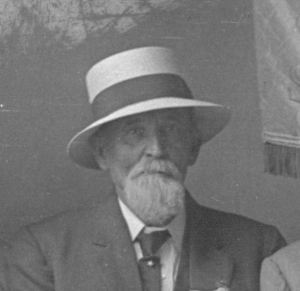 The word “Mosby” is etched across his tombstone, and for many years Suffolk historians believed that Richard H. Hosier served with the famous Confederate cavalry leader John Singleton Mosby.  Of course, that certainly would have been an accomplishment of which to be proud.  Mosby and his men were the famous band of partisan rangers that waged a guerilla war against the Union forces in northern Virginia from 1863-1865.  Among their successes included the capture of a Union General, and the famous “Greenback Raid,” where they seized over $173,000 in newly-printed Federal greenbacks.  In more recent memory, Mosby and his men were featured on the silver-screen in the 1950s in the famed TV-series, The Gray Ghost.  However, Richard H. Hosier never rode with the famed “Gray Ghost.”  Rather, Hosier earned that title in his own right.

Richard H. Hosier was born on August 14, 1818, in Nansemond County, the son of Sampson and Elizabeth Hosier.  Little is known of his early life, although census records show that Hosier never learned to read or write, indicating he had little, if any, formal education.  In the mid-1840s, Hosier married Sarah (some records indicate her maiden name to be ‘Duke’), and they began a family, with Richard farming on a tract of land near his parent’s farm, south of Suffolk.  Their first child was born about 1845, and she was named Mary Hosier.  A second daughter, Eliza Hosier, was born about 1847.  In May of 1850, they celebrated the birth of their first son, and named him Richard T. Hosier, after his father.  A number of other children soon followed.  About 1852, their third daughter was born, Frances Hosier; then another son, Samuel Sampson Hosier (named after his grandfather), born in January of 1855; and two more daughters, Sarah Hosier, born about 1856, and Julia Hosier born about 1858.

By 1860, Hosier’s real estate was valued at two-thousand dollars, and his personal estate at five-hundred dollars.  At the time the census was taken, there were fifteen people shown in his household.  This included the nine members of the Hosier family, a young man by the name of Richard H. Norfleet who had apparently been orphaned at a young age and was being cared for by the Hosiers, one white farm laborer, and four free blacks, that ranged in age from eight to sixteen.  Of note here is that a similar demographic was shown in the 1850 census, with a number of free blacks being shown in the Hosier household.  Apparently, Richard Hosier employed them to work on his farm.  One source from the 1920s indicates that Jason Boone, the well known black Confederate soldier from Suffolk, was one of a number of the free blacks employed by Hosier.

This was disrupted by the start of the War Between the States in 1861, and subsequent occupation of Suffolk by Union forces in the spring of 1862.  While many of his neighbors had enlisted in the Confederate army, Hosier was age 45 in 1861, and considered too old to join the regular service.  On the other hand, he was also viewed as a threat by the local Union authorities because of his Southern sympathies.  Hosier was caught in a dilemma.  He could either stay in the area and risk harassment by the Union forces, or flee the area like many locals had already done, usually becoming a refugee across the Blackwater River in nearby Southampton County.  Hosier, instead, chose another option, and joined a band of local partisan rangers organized by Captain Hamilton L. Norfleet.  This company served as a quasi-militia or home-guard cavalry company around Nansemond County.  Their purpose was to protect local homes and families from harassment by Union forces, and recruit more soldiers for the Confederate army.  The center of their activities and majority of their numbers were from the South Quay area.  Their ranks were composed of basically old men and young boys, and they carried on their normal activities as farmers by day, but served as soldiers when called upon for duty.

Richard Hosier’s career on the fine line between civilian and soldier was a dangerous one, and as a result, Union cavalry patrols were sent out to capture Hosier and others like him.  At the start of the Siege of Suffolk in April of 1863, Union General Peck issued explicit orders to capture the “leading secessionists” in the area.  It is believed that Hosier was included in that number, and was taken into custody by Union officials, only to escape shortly thereafter.  This would be an oft-repeated event in the life of Richard Hosier.  From the scant records that account for this, it seems that Hosier was likely operating as a civilian spy in and out of Suffolk and Norfolk, and reporting his findings to the Confederate forces then surrounding Suffolk.

In a similar record from the latter part of May of 1863, a “Miss Hozier” of Suffolk was detained by Union officials in Norfolk boarding a train, and found to be concealing papers that detailed Union troop strengths in Norfolk and Suffolk.  This “Miss Hozier” is presumed to be a daughter of Richard Hosier, and it is likely she and her father were working together to transfer information to Confederate authorities.  While it is unknown what punishment was carried out on “Miss Hozier” for her activities, it was not long after that Richard Hosier himself was captured in Norfolk.  Local Union officials, tired of his repeat offenses (this was his third capture) and believing that he was a spy, sentenced him to death.

The remainder of this story will be continued in my next column.